Over the last few years I’ve been more conscious of what’s in the products I put on my body and face. I recently started using an app called Think Dirty (tagline: Shop Clean) that’s made it easier to research the ingredients in cosmetics.

Armed with this new tool, I set about looking for face powder and mascara (which I wear rarely anyway) and in the process, somehow managed to block out of my mind the fact that – especially with my dry skin and winter’s dry climate – I liberally use a certain mass-market moisturizer after every shower.

With some trepidation, I looked it up in the app. A solid 10/10 on the toxicity scale. An ingredient called DMDM hydantoin – a “formaldehyde releaser preservative” was the worst culprit. Ooops.

I began to search for a replacement moisturizer – something not too strongly scented, not too expensive, and easy to get in Canada. Apparently this was asking for a lot.

After spending far too long looking for the elusive product, I started to peek more closely at the ingredients in the expensive, natural moisturizers I was finding in the app. Shea butter, “a fat extracted from the nut of the African shea tree,” according to Wikipedia, was in a lot of them.

With that, my adventure in making body butter began. I found a recipe that looked doable and had good reviews. I ordered a kilo of unrefined shea butter (it was cheaper in bulk) and some sweet almond oil. I already had a jar of raw, virgin, coconut oil on hand. I researched essential oils and consulted my friend Victoria who knows a ton about this stuff, and talked with a clerk at my local natural-foods store. I settled on bergamot essential oil – who wouldn’t want to smell like a cup of Earl Grey tea, I thought?

And on a Saturday morning, post blizzard, I got down to work: melting, whipping, jarring. Before I knew it, it was done.

I guess time will tell how much I like my homemade body butter, but I certainly had fun making it. And now I have a hankering for some Earl Grey. 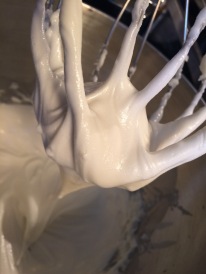 I will let you know!

Cool! I suggest not keeping it in fridge – looks like mayonnaise! Lol.

This is precisely what my sister-in-law makes – all natural, organic skin care products. Excuse the blatant plug, but check out buzzzhoney.com (I’m a bit embarrassed about the site – but I’ll soon be ditching Divi for a new version of her site with Generate Press/Beaver Builder)

yay!! I love my body butter & am super excited for you! Julie Prescesky (@DesignInkarnation) got me hooked on this!

That’s great! Thanks for the app suggestion. I have been making my own body butter and other toiletries for a few years now. I really do enjoy it. With nut allergies in our family, it is so important that I am in control of the products that I put into my body. I use Shea Butter, Coconut Oil, Avocado Oil with Peppermint, Lavender, and Tea Tree Oil for rest and relaxation.

Kay, I think I totally missed your comment the first time. Your ingredient combo sounds lovely and I’m interested in hearing what other toiletries you make!

No problem; it happens! I make a lot of different things! I’ll post some on my blog too!

Leave a Reply. (I'm unable to answer support requests in comments - check out my list of WordPress resources instead: http://wp.me/P3znQ7-dZ ) Cancel reply